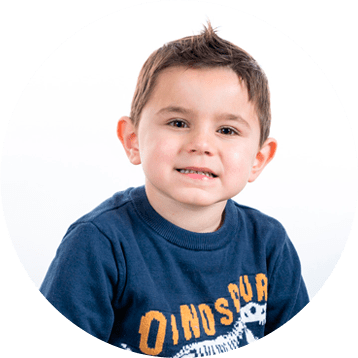 Bruno is a warrior who fights day after day against Burkitt’s Lymphoma.
Get to know his story!

It was just a year ago that it all started. Bruno's family had a new home and his baby brother had just come into the world. But Bruno was tired, didn't eat, had an unusual complexion, and hardly played with his dinosaurs, which were typically inseparable, anymore.

"I have an invisible evil,” said Bruno, while his parents desperately tried to get medical attention at home in the middle of the pandemic. When they finally crossed the threshold of Vall d'Hebron, the diagnosis was known almost immediately. Bruno was suffering from Burkitt's Lymphoma, a very aggressive type of leukemia that had to be fought immediately.

Bruno spent six months hospitalized: trying to cope with the treatment, his mother sleeping next to him every night in an uncomfortable armchair, with no visitors and hardly leaving the room.

Precisely for this reason, he knows the importance of the project, to create new spaces for parents to rest, a private dining room where families can disconnect for a while, a playroom for the kids, an area for teenagers where children can talk about their worries, getting as close to a normal childhood experience as possible, far from doctors and parents...

Now, it has been three weeks since Bruno went back to school, he has finished his chemo treatment and only goes to the hospital once a month for his check-up. Bruno is now making up for the lost time in his childhood, playing, laughing, spending time with family far without his “invisible” evil.